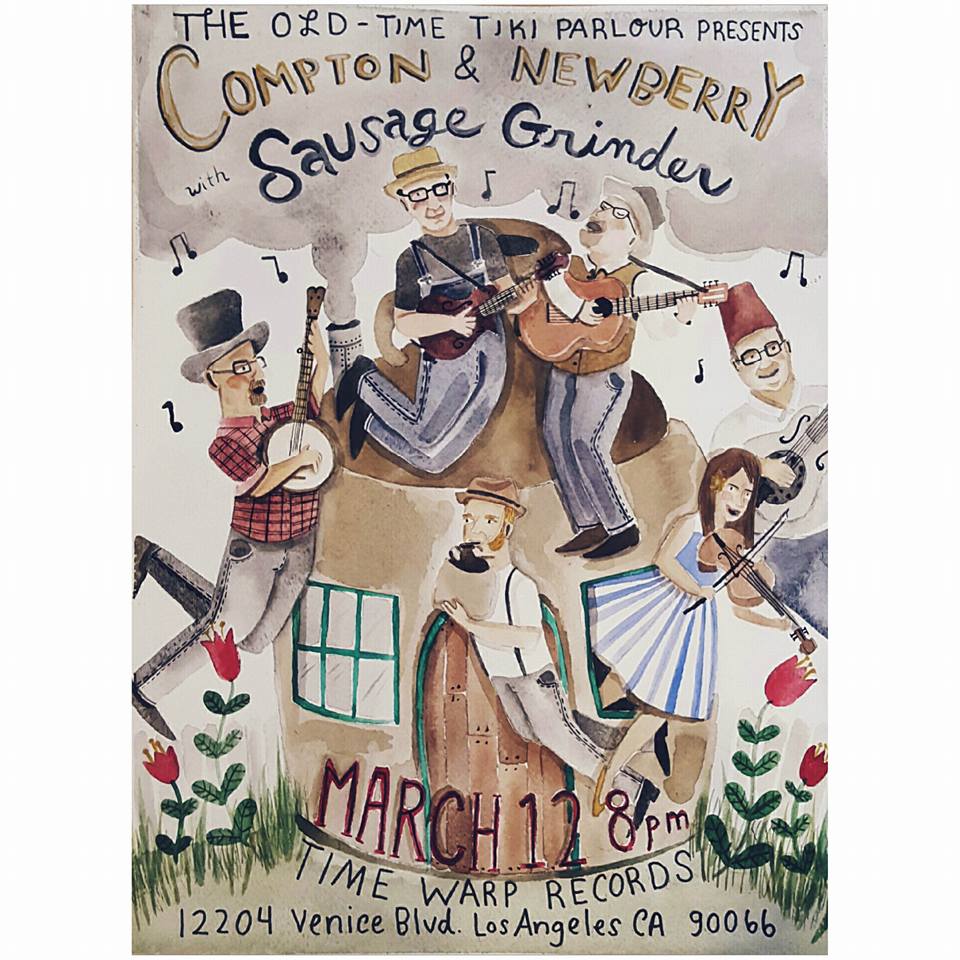 Tickets are only $20 for this rare and exciting concert.
You can order tickets safely and directly HERE
or you can send me a check. Contact David Bragger if you have questions.

Please RSVP as soon as possible!

Joe Newberry will be teaching a BANJO workshop
on Friday, March 11th at 7:00 at The Old-Time Tiki Parlour.

Mike Compton will be teaching a MANDOLIN workshop
on Saturday, March 12th at 5:00 before the concert at Timewarp Records. 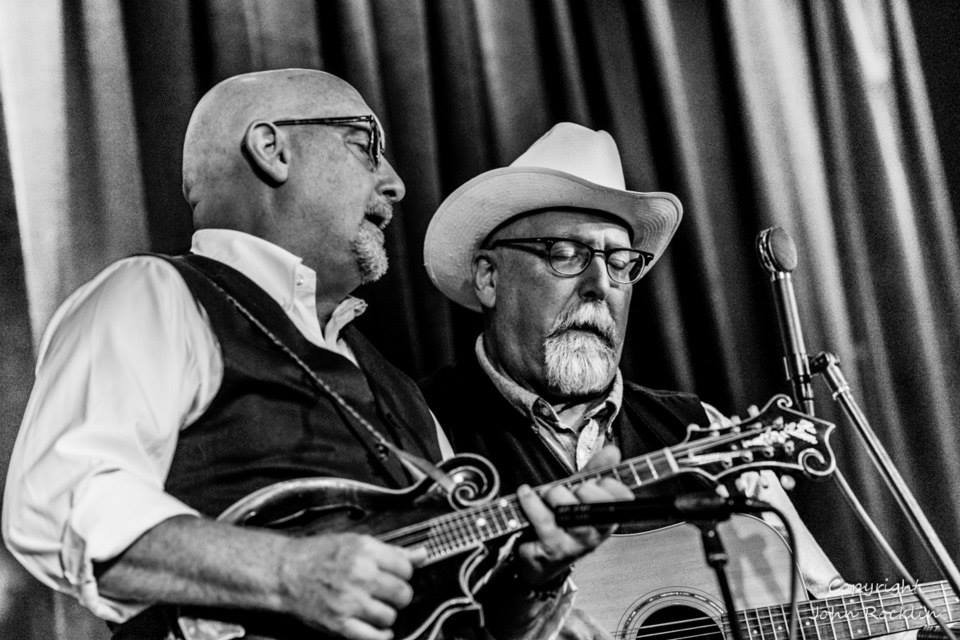 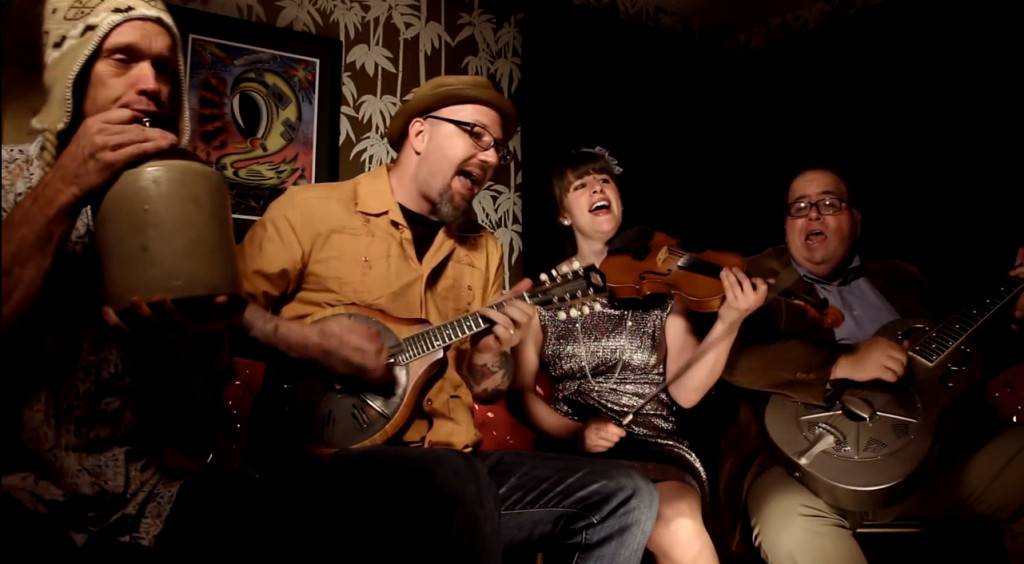 Mike Compton and Joe Newberry mine one of the more neglected segments of country music history, that period during the ’30s and ’40s when brother duet music was transforming into bluegrass. Both masters of the bedrock instruments of old time music, they collaborate with a vision that is both modern and ageless. These two traditional music veterans love to play together… and it shows!

Mandolin Magazine calls Mike Compton a player with “a worldwide reputation as one of the modern masters of bluegrass mandolin…one of the most recognizable and respected mandolin voices anywhere”. He’s a Grammy and IBMA Award –winning recording artist; soloist, duo and band performer; and as passionate a teacher, preservationist, and advocate for the mandolin as you’re ever likely to find. Mike is in demand today at every level: solo tours, treasured performances with the Nashville Bluegrass Band, high-energy performances with Helen Highwater Stringband, appearances with duet partners, instructional settings, to studio recordings with bluegrass legends such as Ralph Stanley and country stars like Faith Hill. In the end, there’s no better way to say it than in the words of Mandolin Magazine–Mike Compton, is, simply put, “a certified mandolin icon.”

Joe Newberry is a Missouri native and North Carolina transplant who has played music most of his life. Known around the world for his powerful banjo work, he is a prizewinning guitarist and singer as well. Joe’s songwriting is characterized by the same clean, elegant style as his banjo playing. The Gibson Brothers’ version of his song “Singing As We Rise,” featuring guest vocalist Ricky Skaggs, won the 2012 IBMA “Gospel Recorded Performance” Award. With Eric Gibson, he shared the 2013 IBMA “Song of the Year” Award for “They Called It Music.” Heard often on A Prairie Home Companion, Joe is a founder of the string band Big Medicine, and along with Mike, performs with Bruce Molsky and Rafe Stefanini as The Jumpsteady Boys, and with Old-Time Music legends Mike Craver, Bill Hicks, and Jim Watson. Still going strong after more than 30 years as an anchor in the traditional music scene, Joe writes songs that consistently show up on the Bluegrass charts, does solo and studio work, and plays and teaches at festivals and workshops in North America and abroad.

Sausage Grinder, Los Angeles’ all-natural hillbilly and country blues band, combines the traditional sounds of fiddle and banjo breakdowns with the low-down sound of country blues, topped off with a touch of ragtime and hillbilly jazz. The versatile acoustic ensemble features fiddle, banjo, guitar, mandolin, jug, washboard, and a few odds and ends.

Sausage Grinder was formed in 2008 out of a desire to play this classic music “right” without being slavish imitators or academic lecturers. As old-time and blues fiddler Adam Tanner puts it, Sausage Grinder’s “reverence to the old 78s hasn’t restrained them from exploring even grimier nooks and crannies … unrestrained and impolite the Grinder’s performances are visceral and joyous — a blast from the past with a nod to the immediacy of the future!” Or as LA Weekly says succinctly, the band’s performance feels “reminiscent of an old Mickey Mouse cartoon.”