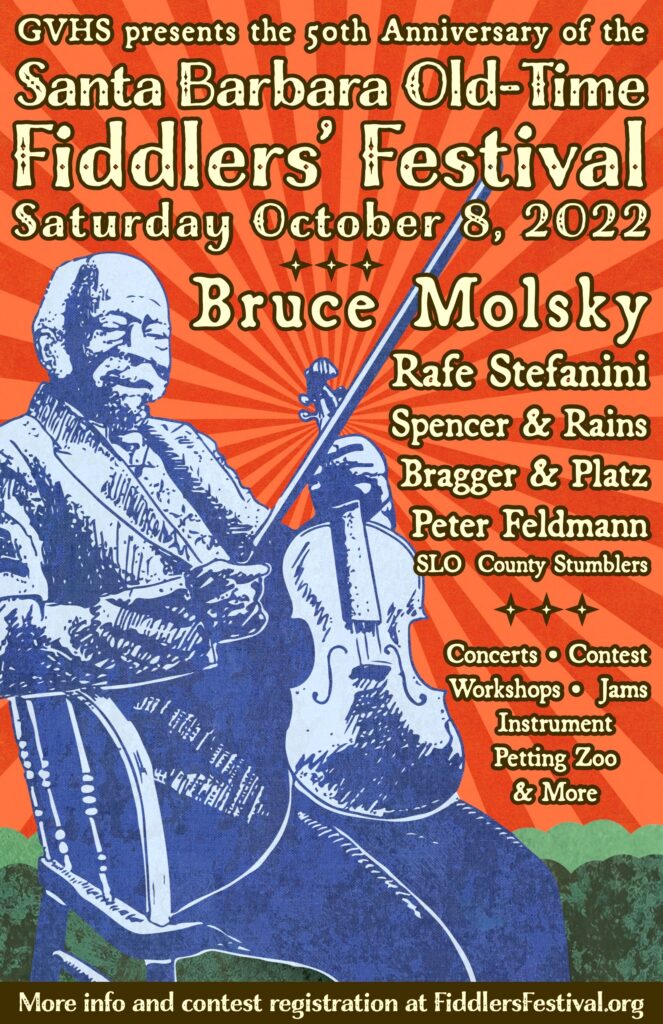 The Santa Barbara Old-Time Fiddlers’ Festival is celebrating its 50th year on Saturday, October 8th! Join us for one of my all-time favorite, family-friendly, traditional music festivals on the west coast. This is my seventh year serving as the artistic director of the festival and I’m excited to officially announce the extraordinary line-up of musical artists and events below. The festival is hosted by the Goleta Valley Historical Society who strongly believe in preserving the history and living culture of old-time music. The festival will present performances and workshops with master musicians, hosted jam sessions, an instrument petting zoo, vendors, food trucks, and the “beating heart” of the festival itself: the contest.

The CONCERTS this year are off the hook! I’m so thrilled to announce that Bruce Molsky, the most influential old-time fiddler of our generation, will be performing. Bruce is not just a master old-time fiddler but his prowess extends to banjo, singing and finger-picked guitar. In fact, this Grammy-nominated old-time master released his first solo guitar album Everywhere You Go this year. Bruce has performed and recorded with musicians including Mark Knopfler, Tony Trischka, Darol Anger, Mike Seeger, Rafe Stefanini, Anonymous 4, Allison de Groot, Aly Bain, and many others. Bruce will also be teaching both a fiddle and a banjo workshop at this year’s festival. We are besides ourselves knowing that Bruce is joining us for our 50th celebration.

Old-time powerhouse Rafe Stefanini will be joining us for his third time at the festival. Rafe has recorded and performed with many celebrated old-time musicians throughout his career including Bruce Molsky, Mike Compton, John Doyle, John Hermann, Dirk Powell, his daughter Clelia Stefanini and many others. He was one of the first fiddle workshop instructors that I ever learned from over twenty years ago. Since then Rafe and I collaborated on Holy Smoke, an album of old-time fiddle and banjo duets. I can’t wait to have him back to share his music and teach a workshop.

For me, this year is a true reunion of musical friends. The Kansas/Texas old-time fiddle and songster duo Spencer & Rains are joining us again by popular demand! They specialize in tunes and songs from the Midwest and Texas. They are also folk artists whose work has adorned many traditional music albums and festival art. In fact, Howard’s artwork has been visible for the last several years on the Santa Barbara Fiddlers’ Festival posters and T-shirts, including this year’s poster. I had the great pleasure of recording and filming Tricia Spencer and Howard Rains several years ago where we instantly became friends and musical buddies. Fiddler Susan Platz and I have had the pleasure of performing and teaching at festivals around the country with them. It is so wonderful to have them back at our festival. Tricia Spencer will be teaching an old-time fiddle workshop and Howard Rains will be teaching an old-time guitar workshop.

One of the rising star stringboards in California is the SLO County Stumblers. We are delighted to have them back with us at the Stow House. They are a high energy old-time stringband (fiddle, guitar, banjo, bass and singing) that will get you dancing and foot stomping within seconds. Their band members have performed for years in other configurations but now they’ve formed this supergroup that have become wildly popular on California’s central coast and as far as Europe. I’m totally stoked to have them back.

I’m extremely honored to share the stage with our festival founder. The Fiddlers’ Festival was founded 50 years ago by old-time/bluegrass musician and folklorist Peter Feldmann who envisioned a festival completely dedicated to sharing traditional music with the community. Five decades later, it is still going strong, attracting musicians and traditional music lovers from all around the country. Peter’s performance will be preceded by a performance of double fiddle tunes by my playing partner Susan Platz and myself.

This year we have brought the CONTEST back to the main stage, interspersed with the concert performers. The categories include: fiddle, youth fiddle, banjo, youth banjo, singing, and band performance. The contest’s mission is not only to expose this music to all the musicians (and non-musicians) who attend the festival, but to help spread the music into the local community and beyond. Musicians of all levels, including beginners, are highly encouraged to sign up and show their peers (and judges) what they’re playing and what they’ve been practicing. It is truly inspiring to witness players of all ages and levels play the old tunes and songs of early America. Often, spectators transform into musicians once they see how much fun the contestants are having. The contest registration is now completely online. The online contest registration period is from Friday AUGUST 12, 2022 at 3:00PM PDT to SEPTEMBER 16, 2022.  Contest Registration HERE.

Throughout the day, there will be HOSTED JAMS by the wonderful staff of jam leaders: Jim Mueller, Harry & Cindy Liedstrand, Joe Wack, String Bean Serenaders, and Smoke Holler. Additionally, there will be many other areas for impromptu jams to take place. We also are excited to continue hosting the ever popular Instrument Petting Zoo where children and adults can try out instruments and see what makes them tick. It’s a great judgement-free area for people to get their hands on instruments with support and guidance from the petting zoo staff.

Now I’d like to draw your attention to the fiddler depicted in this year’s poster: Alonzo Janes. (1850-1937). At our last in-person festival in 2019, we had renamed the stage the “Alonzo Janes Performance Stage” to help preserve the legacy of this special individual who had a huge impact on my musical life. Descendants from three states attended the festival to be part of the stage dedication.

Known in his family as “Uncle Jimmy,” Alonzo Janes was born in Paris, Tennessee. His father’s name was Peter, though sadly his mother’s name is lost to history. They lived in a small brick farmhouse that his parents helped build, along with the extended families of the farm, both black and white. Family myth holds that Alonzo often travelled alongside his enslaver, sometimes on riverboats down the Mississippi. In New Orleans, where he was sometimes left alone, he considered running away, but was told by an elder not to worry, that soon they would all be free. He had thought it was a psychic prediction, but more likely, his advisor was simply reading the newspaper and knew of the coming war that would indeed liberate his people from bondage. After slavery, he moved with his wife, Mary Magdalene Wright, and their children to Moscow, Kentucky, and finally to southern Illinois. They initially resided in the small town of Onarga and then the slightly larger Pontiac. There he met the musical Durham family while working as a cooper. During this period he shared his fiddle tunes with the Durhams. Two of these tunes, “Over the Mountain” and “Alonzo Janes,” were passed down to fiddler Mel Durham (1914-2008) who relocated to Southern California just after World War II. Mel shared Alonzo’s tunes with several generations of fiddlers in California. When our festival director David Bragger first learned these tunes from Mel, he became obsessed with playing them and learning more about their origin. For the last 15 years David has been teaching Alonzo’s tunes around the world at festivals and workshops without much historical information about their source. However, a few years ago with the help of fiddler/genealogist Cynthia Richardson, David was miraculously connected with Alonzo Janes’ descendants. The family was able to hear their patriarch’s music for the very first time – they also provided photographs! It is with great pleasure that we are honoring fiddler Alonzo Janes as well as the folk process through which his tunes came to us (Janes to Durham to Bragger) by renaming our main stage “The Alonzo Janes Performance Stage.”

This year the festival is on Saturday, October 8th. You can now purchase the ridiculously inexpensive festival tickets HERE. Tickets are only $15 if you purchase early bird tickets online (or $20 at the door). As always, children under 12 are FREE. These tickets cover everything: Performances, contest, jams AND workshops! The festival is 100% outdoors on the beautiful and shady grounds of the Stow House just off the 101 freeway in Goleta.

We encourage you to bring a folding chair and picnic blanket to the main stage lawn as you enjoy the performances. No dogs allowed.